You are here: Home » Around Gainesville » 3-Day Weekend

What a hectic weekend this was! I can’t believe yesterday was my first day off for non-medical reasons in a year. I’m glad I got to spend it floating down a river and eating BBQ with my boyfriend and two best friends.   I have so many recipes and photos to post, but I’ll try to stick to the most important things.

Chase Went to a New Home

On Saturday, Chase went to his usual adoption day at PetSmart, where he found his new foster home. We felt really bad keeping him and Trina cooped up in our townhouse with no yard to run around in, and a family with 4 kids happened to fall in love with him at Petsmart. They had just lost their foster dog due to a series of neurological complications, so they had an empty spot in their warm, cozy home with a big back yard. 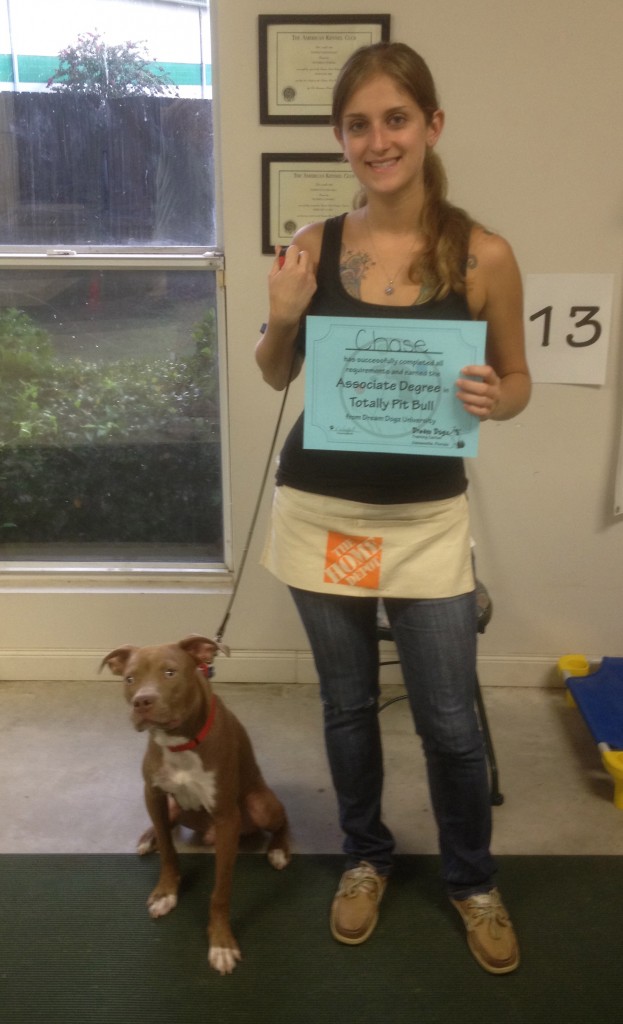 On Sunday afternoon, I dropped Chase and all his accessories, including his awesome Totally Pit Bull Training Certificate, off at his new foster’s home and said my goodbyes. He didn’t seem to realize I was leaving, as he quickly befriended his new big foster sister, which made it a little easier for me.

My pal from Colorado and her boyfriend, Josh, got in around 8pm on Sunday night, and we all went to Gators Dockside for dinner and drinks. I didn’t take any pictures because it was dark and I didn’t want any documented evidence of the gator tail and chicken wings I consumed. After a thoroughly deep fried and unhealthy dinner and a couple of Yuengling pitchers, we returned home and decided we wanted ice cream cake, still leftover from Troy’s birthday. Once we settled down from our questionable food binge, we tried to watch Man On A Ledge and fell asleep halfway through from an overwhelming case of the itis, also known as a food coma.

Monday was the most exciting day of my 3-day weekend. We finally got to take our long-awaited trip to Ginnie Springs, which is gorgeous park with 7 freshwater springs that feed into the Santa Fe River. You can go tubing, play volleyball, camp, grill, scuba dive… just about anything you can think of for a great time outdoors.

The weather has been pretty predictable lately, with clear, sunny skies in the morning and afternoon showers. The plan was to get out to the springs around 10am and try to float down the river once before the rain started. However, between our collective dilly-dallying and making several stops, we ended up getting there around 1pm, right in the midst of the afternoon showers.

We managed to float down the river once before it really started pouring, and when we were walking back to our camp site, the rain let up. It seemed like a good time to start grilling, but of course, it started to rain again as soon as we had the grill lit, so we took turns holding an umbrella over the grill and keeping an eye on all the food, which came out incredible.

I prepped sweet onion burgers, 3 types of chicken and spinach dip, and the boys did a marvelous job of cooking all the meat. There would be pictures, but we were starving and the food was devoured before I had a chance to grab my camera. I may have contributed to that problem as well.

We got lucky that the rain let up and we were able to float a second time. This time it seemed a lot colder, so the trip didn’t last long and we packed for home. 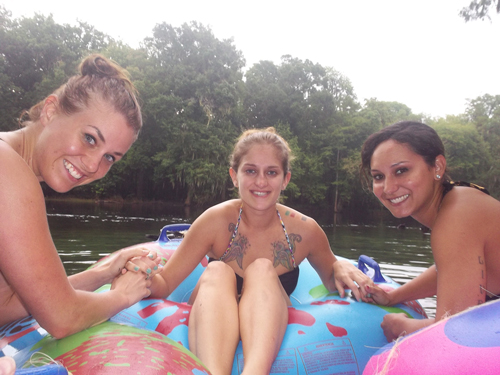 In the evening, we went to Gainesville’s best not-so-Irish pub, Mother’s, to see our friend who worked there and wasn’t able to make it to the springs. Whitney was on a mission to see all our friends before she left town today. They had 40 cent wings and $1 Rolling Rocks, so I caved in to the chicken n’ beer Gods, since this girl can’t pass up a deal.

Did I mention that at no point this weekend did I perform any sort of physical activity other than cleaning, laundry, vacuuming and cooking? So much for working out with my fitness buddy from afar. Sometimes I think this blog talks more about how I cheat on my diet and exercise plan than how much I actually stick to it. And since I’m so pooped from all the running around I did this weekend, I won’t be making up for it today. Well, not in my normal Insanity way.

When I get home from work, I just want to kick back and relax on the couch, put my feet up, order delivery and catch up on all the TV shows and Olympics I missed this weekend. So in honor of my laziness, I have a quick and easy workout that I want you to add to one hour of TV watching tonight. For one hour tonight, don’t fast forward through commercials or get up to get a snack while you’re watching TV. Instead, do as many reps of possible of this circuit during each commercial, alternating circuits after every one. 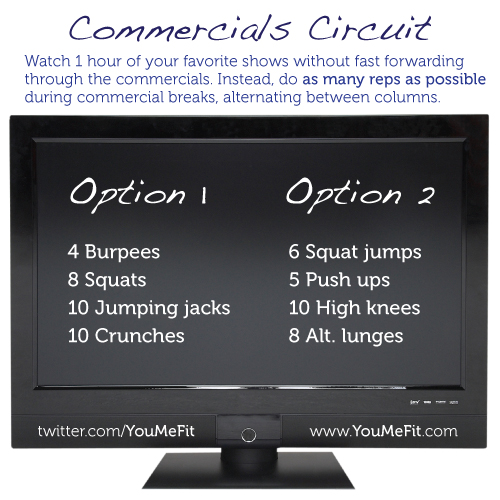 *Edit* I didn’t end up publishing this until abut 9pm eastern, so now I’m watching the Olympics and doing this workout!

Training For My First Race

Training For My First Race